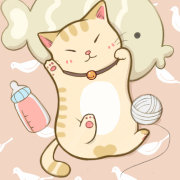 #天下有情人终成HE# #这句话的含糖量超标了# (These are the hashtags for the Weibo compilation mentioned below.)

I took the opportunity to casually write a little extra in response to an invitation to join a Weibo compilation. I think it’s not necessary to specify which work this extra is from.

This was the name given by the first owner who started feeding Xiao Bai.

There are thousands upon thousands of people and animals named Xiao Bai in this world. If one must find a special defining characteristic of Xiao Bai, then it is its ability to understand human speech.

“Do you still consider me a friend now?”

Xiao Bai was perched on a branch when it heard someone say these words.

It lowered its head and saw a man leaning against the tree which it was perched in. Another person was squeezing his jaw, forcing him to raise his head.

The person sitting on the floor was breathing weakly, his body emitting the faint, fishy tang of blood.

Are these two people friends?

It very quickly overturned its initial inference that the two were friends because once the first person had finished speaking, he selfishly left— leaving the person lying on the ground at the mercy of a third person who walked over whilst speaking in a mocking and taunting manner.

Xiao Bai was somewhat worried; it did not like to see dead people. In such turbulent times, there have already been countless people who have died in its presence.

It was also aware that there are many people who are narrow-minded. Although killing a person is as simple as getting their head to roll to the ground, they instead choose to slowly torture their enemies and opponents, savoring the other party’s tragic state before they are finally willing to call it quits.

Just like the scene before it: the person sitting helplessly on the ground was defenseless and was humiliated over and over again by the other person, yet had no way of counter-attacking.

Xiao Bai had reached the point where it couldn’t bear to watch this gloomy and tragic scene any further, and hence it began flapping its wings, preparing to fly away.

Yet, that person actually managed to offer resistance.

A sudden fierce gale arose and the fallen leaves swirled into the air. The person that it originally had thought to have no chance of winning — and who had been at the mercy of the other — actually managed to fight back against the other person.  asdasda kugkyugko’

Xiao Bai was deeply afraid of getting involved; and so, it hurriedly flew to a location that was even higher and further away.

Even after it had left for a long time, it was still pondering several questions.

The first person— did he deliberately abandon the other person in this place to ignite his latent potential?

Then if so, does he or does he not take the other person as a friend?  iheohroawhrow

Does the word ‘friend’ truly hold such complicated meaning in the growth and development of all living beings and creatures?

It thinks that it will never understand.  hfhjtjtdu

Xiaobai Art by Niko, and used with permission. Thank you~!!